me, myself and I

I had such good intentions to post regularly; if not daily at least weekly and now evidently I am unable to even squeak one out monthly. A post that is.
Not even making a finger to font commitment to get through a simple alphabet has borne much fruit.

Sigh
But… forge on I will…. make excuses for life getting in the way I wont.
And that is where we are in this 26 step program…
the letter I...
I guess I could wax lyrical about Integrity, or it’s lack thereof, or bemoan the abundance of Ignorance. I could even talk about how old wounds surrounding Infidelity have been slashed open with a fleeting visit to the island from Dorkus’s (my ex) mother; but maybe I will leave that for another day when I am feeling less ragged around the edges.
Interestingly when I found myself staring at the blank screen with the letter "i" staring back at me, it occurred to me how that little letter has become an institution all on it’s own.

Not only do we have the iMac, the iPad, the iPhone and the iPod there are all of their derivatives. And when I say ‘we’ I don’t mean ‘I’. Okay to be fair I do have an iMac so of course iLust after an iPad but I’ve not joined the Pod or Phone iLists. I know once I do the whole world of apps will open up to me and I will be lost.
Just last night friends were over for dinner and were playing phone-phone. They had us all in stitches with the talking cat and tweeting bird apps. I have no idea what they are called but believe me if you can tickle the tummy of a cat on the screen of your phone and have it smile and purr you will never be alone or without a smile on your face.

So back to those aforementioned iDerivatives which take their inspiration from various Apple products and are making huge in roads into the urban dictionaries; words like:
iHand - When a person uses their iPhone so much it becomes a part of their body.
iKnob - Anyone on god's green earth who owns an Ipod and brags about it.
iLick - The act of licking ones finger before flicking the page on any touch screen.
iGuitar - Similar to an air guitar but with an iPod in one hand, headphones in, the other hand moving like playing a guitar. Because nobody else can hear the music, they look a bit more than stupid.
Surely that person would qualify as an iKnob as well wouldn’t they?
iLord - One who is all Macintosh all the time; a Mac fiend. He has everything Mac has put out in the last ten years. (This would be my brother; no contest!)
iLone - When you find yourself among other people glued to their iPhones, while you are still part of the dying race of people that uses a phone to call. (This would be me.)
iPhone effect - shortly after one person in the group brings out their iphone, the rest follow suit, ultimately ending all conversation and eye contact.

"Hey, what do you want to order for drinks?"
"Not sure, let's see what Imbibe Magazine has for their best beer this month."
First iphone comes out of the pocket--enter safari search.
Next iphone comes out--enter Facebook post.
Third iphone makes an entrance -- the iphone effect has arrived.
iPhoney - A cell phone which copies the look and features of an iPhone.
iPeeper - a person who looks at someone's iPod screen to see what it is they are listening to.
iShattered - what happens to the glass screen when you drop your iPhone or iPad

And these definitions are very clever...
iVodka - The mixture of apple juice (of any kind) mixed with vodka (of any kind) or
iPerbole - The hype surrounding any product Apple unveils.

I just love the ones that have no connection to anything fruity or Mac but use the same construction like:
iGuess - Not knowing what the hell is going on...
iMail - "Idiot Mail" or the endless amount of ridiculous and inane email one receives from idiots all day long, especially at work or in a corporate context.
And of course, as with 'idiot' the whole word ‘inappropriate’ can also been shortened to an i and added on to whatever it might be describing...like an iComment or iDriving or iDancing or to a person e.g iDave - one who has no social skills or generally doesn’t seem to be able to say or do anything right.


The iOptions are endless...see... you can just make them up as you go along!
I must say I was mortified to find a whole genre of urban definitions using Ikea as its inspiration!

"Shit! I got Ikea'd"
- when you open something that unexpectedly needs to be assembled...or...
The 5 screws left over from putting that armoire together are a sure sign of an impending Ikeatastrophe
One could go on and on but one wont... one will end off with another little iWord....
If
This has been identified as the biggest little word in the english language.
If can do many things.
It can stop a contract from going through. It can stop a marriage.
It can step in and change one’s life dramatically. All those what ifs.
If can change you point of view, perspective and interest all at once.
If can stop love. 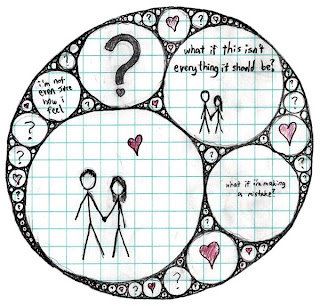 Thanks to the Urban Dictionary for the definitions
Posted by Possum at 5:27 PM