...ergo there shall be no angst whilst we ponder the letter L!
Of course the first word that springs to mind is Love. She is closely followed by Life and Laughter. And did you know that there are a whole legion of Lost words? I've read that there are rare words, and the there are even rarer words, but only a very special word qualifies as a bona fide lost word. And by lost it is meant never used on the internet. There is now a whole website dedicated to them ...hmmm... I guess those that were once lost are now found.
A few years ago I received a list of words that Collins (I think) were proposing to have removed from the next print of their dictionaries. Evidently they felt there were now too many words in the English language so the lesser or never used ones were lined up for deletion to make way for newer ones. There was a mad panic amongst writers to use these endangered words as often as they could before print date to try and save them from extinction. I must look for that list as they were truly worthy words...much worthier than the likes of 'unfriend'…’meh’.
I don't know about you but I can get lost in lists of rare words...one finds words like Lairwite ~ a fine given to a married woman for adultery; evidently paid by her father! That alone might cause some to take pause and reconsider their morals! And what about Logogogue ~ one who issues laws or rules regarding words... not unlike the head honcho of Collin's but I guess CEO looks better than Logogogue behind one's name! And did you know that a Lambdoid means shapes like the letter Lambda (^) or "L"?

Anyway, in an effort to keep it Light and Limpid and not get too Largiloquent, my focus for this letter of my alphabet will be 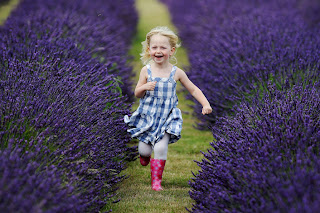 It's colour, aroma and simplicity strike such a chord in me not unlike this picture. Suffice to say I have a Lot of it growing in my garden.

The last time I was in Cape Town I drove far and wide hunting down a pink flowered variety to go with my treasured white one. And don't raise those eyebrows...it was only one little plant! The year before I transported...oh all right...smuggled...my curry tree, root cuttings from my precious rose bushes, the aforementioned white lavender plant along with a pink one and a yellow one...the last two subsequently died hence my quest.
I really do think we are getting off topic here people!!
Besides when I found a pink one, at a ridiculous price I might add, I was very thorough about washing off all the soil from the roots as its that that seems to bug the plant police. I guess they've had the Last Laugh as when it bloomed this summer it wasn't really that erm..Pink... not like the picture on the label. I Know...Lesson Learned...from now on I will just smuggle seeds in - although I'm pretty sure if they are hermetically sealed then it can't be deemed a smuggle! And no, there is no such a thing as a garden centre on this little island so to be fair (to me of course!) I have been forced into these bad habits!

I have a small plot of land that has lain fallow for all time and my plan is to slowly but surely grow enough of my beloved herb to replace the untold volumes of weeds that have found refuge there...imagine that!