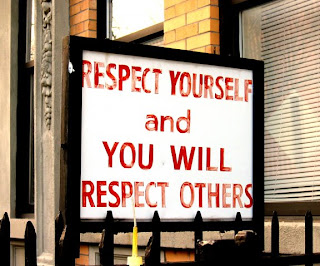 It really is as simple as that.
One can wax lyrical about the relationship between reaping and sowing or the abundance and kindness of reciprocity but unless you have respect for self you have nothing to give.
The wise ones go on about how one has to give it in order to get it. I really don't think that it should be about the getting of respect. Way too much emphasis is laid at that damned door. The perception is that if one is not getting respect then one must be a lesser mortal...not enough as is. Lives can be altered buying into that shit! I mean think about the hoops one jumps through at times in order to crack the nod. And why? Because we are made to feel we are not enough. One should not NEED to 'get 'if one 'has'. And if one has self respect then one is enough.
And we all have it...we all start out with it totally intact.
Of course if a child is put down, criticised and disparaged all its life then yes... it will WANT it. So here's the thing... prospective parents should make sure their respect for self is nice and strong and self sufficient before they take on the responsibility of having children. I mean how on earth can one teach a child about self respect when one has none?
How will a mother be able to set an example to her daughters about respect if she has none for herself; if she allows the father to abuse her at any level?
And if a father uses fear as a means to gain respect then that poor child will spend its life living in fear and yearning for and trying to get his approval.
Of course once the big bad world is let in on this scenario that poor child will have become so accustomed to the fact that they are not worthy unless they are respected by others. Fuck that I say!!  I believe that what we should be teaching our children from the get go is how to preserve one's self respect...how to have more respect for oneself...how to put into perspective the value of respect from others. This should be our religion!! Have faith in your self first and the rest will follow.


It is quite a thing to realise that that big black hole of need in one's life is due to the fact that a lot of the significant others in one's childhood... in my childhood ...my life ...were...are...so lacking in self respect. It's taken me a long time to realise that I have never needed respect from these significant people and if they have made me feel less than enough then  shame on them...shame on them for the little girl that once was. But the good thing is the little girl is a big girl now and she can see these things.
The irony is that the less one feels the need for it the more one will just get it. You think about the people you really respect; if they are anything like the ones in my life then they will be folk who are resoundingly secure in their own skin, in their respect for self. They will also be resoundingly few and far between!!
Of course we all have our little quirks of insecurity if we scratch beneath the surface but those will be the ebbs and flows of life, the occasional bumps like turbulence in our flight. They will not be life defining if we have that solid base of self respect. 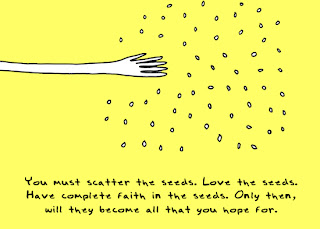