it all begins with an A

“More powerful than all poetry,
more pervasive than all science,
more profound than all philosophy are the letters of the alphabet,
26 pillars of strength upon which our culture rests.”
Anonymous

There has been an abundance of challenges in the blog world; 30 days of this, 30 days of that. The one that that I caught the ..erm..tail end of was an A to Z challenge over here

I like the idea of committing to a discipline and I like the concept of this one as the alphabet theme leaves it open to interpretation and application. And yes it would be nice to be linked up with others who are doing the same thing to see what word they choose on any given day, but what the hell…there are hundreds to scroll back through over here

“Writing is a system of human communication that works through the use of visible signs. The beginnings of writing are inseparably connected to those of art,
and one must never treat them as separate entities.
All letters are signs, and all signs began as pictures.
The alphabet is the source.
When one considers the immense power of mans spirit,
it is amazing to think that it could not have developed without the alphabet.
How clearly we are heirs to this process…the links in a chain.”
Freidrich Nuegebauer
Ap-pre-hen-sion       - anticipation of adversity or misfortune; suspicion or fear of future trouble or evil.
This noun beginning with A was my theme-word for today.
Why? Well a little over a month ago when I was back in Cape Town for a short visit I decided to have a mammogram. Having had my first scan a year ago I had no feelings of trepidation arriving for this 8am appointment; I'd not previously endured that much joked about discomfort of having ones boobs slammed between a pair of frozen bookends. Sure it is uncomfortable for a brief moment, but really, all that fuss.
So I thought. Four hours, five scans and an ultrasound later I had changed my opinion. Although to be fair, the standard ~turn to the left, press, turn to the right, press, return to your cubicle and wait for your result~ procedure was quite bearable, as it had been before.
It was the waiting.
The cubicle.
The delay.
The not knowing what the delay was for.
Hearing your name being bandied about for a call back not once, twice or thrice, but four times.
FOUR!
By that time I was starting to snarl at the radiographer.
And still that was not enough.
I was instructed to return to the confines of my 90 x 90cm cubicle to wait until I was called for.
I requested a magazine refresh.
Eventually I am called to have my very first ultrasound.
The medical folk are all staring and the screen like they are watching their favourite soap... the bold and the boobiful perchance...
The nodding and the frowning is not calming my frazzled nerves.
So what now?
Now we need to remove the source of all our frowns.
And how does that work?
Well, we send you for another mamogram (another one??) this time with a needle (a needle???) so that some dye can be inected to mark the spot and then we find an available breast surgeon...
Whoa!! Surgeon? As in hospital, anesthetic, theatre?
Shit! This is now a Friday and I am supposed to be flying long haul on Monday... I try to explain through tears
Aah...much excitement...where are you going?
And that's when it hit me...HOME. As ghastly as this whole morning was turning out to be, it was in that watershed moment that I knew that the lovely little island that I had moved to a year before was indeed my new home.
And I couldn't wait to get the hell back here either!
Which I did... armed with all my scans and this morning was the morning that I started the procedure of having things attented to by the doctors here.
Ergo the apprehension...


"Apprehension, uncertaintly, waiting, fear of surprise, do a patient more harm than any exertion"
Florence Nightingale
Harm? Well if that's the case then I need to have a theme-word do-over! 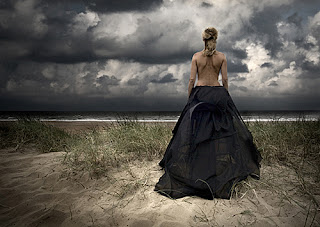 An-tic-ipa-tion
That'll do. Especially number 3!
Posted by Possum at 10:25 PM